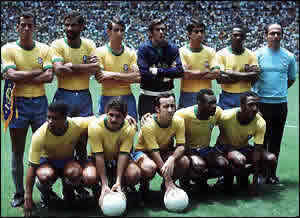 My Football Facts is the leading source of historical football facts & football stats on the web, covering all aspects of The Beautiful Game from the very first FA Cup matches in 1871-72 right up to today's National and International competitions from all over the world.
The full histories of domestic leagues from over 90 different countries are included with chronological lists of League Champions, tables of League Championships won by clubs and the current League tables. Summaries of these Leagues and a table of every club to have won 10 or more National League Championships is also included.
The English game is covered in great detail with statistics from all four Top Flights of League Football from 1888-89 onwards as well as from Non-League Football. Both Domestic Cup competitions are featured with season by season charts of the progress made by every club who has reached the last 32 in both the FA Cup from 1871-72 and the League (Carling) Cup from 1960-61. In addition, the Charity/Community Shield matches are covered and there are tables for overall performance in the League, Cups and European Trophies won by English clubs.
All International club competitions from UEFA are fully detailed as are the major South American, African and Asian club  tournaments. The history of the FIFA World Cup is well documented with unique charts showing the progress made by every country which has participated in the Finals from 1930 to 2010. International competitions are also featured from Africa, Asia and South America.
Special sections on MyFootballFacts.com also highlight the legendary players from around the world who have made special contributions to the game. There are also sections dedicated to Player of the Year awards and comprehensive stats on Premier League players appearances, goalscorers and assists as well as details of every Foreign player who has appeared in the Premier League since 1992-93.
Aspects of football finances are included and there is a fully detailed section on Scottish Football at both club and international levels.
Fully interactive databases of all 92 English League clubs and the 42 Scottish League clubs also feature on the site.
Tottenham Hotspur football club has its own special section with details about every aspect of the club's history and players, both past and present alongside comprehensive statistics from every competition Spurs have participated in and full coverage of all the opposition Spurs have faced since 1882.
We are constantly looking to expand the scope of the site and future plans will include dedicated sections for many more clubs from the Premier League, elsewhere in Europe and beyond.
We welcome your comments and suggestions about MyFootballFacts and are happy to host reciprocal links to other football sites.
My Football Facts & Stats Home >> About